The Coat of Arms

Spe Nemo Ruet bears a similarity to the name Spennymoor and means “with hope nobody shall fail”.

This has a double significance referring to the spirit and the faith, which animated the pioneers of Spennymoor industries. 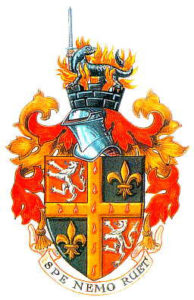 Quarterly Gules and Sable a cross Or charged with ten Guttes de Sang in the first and fourth quarters a Lion rampant and the second and third quarters a Fleur de Lys Gold And for the Crest Standing upon the battlements of a mural Crown a Salamander regardant Sable enflamed proper grasping with the Dexter claw a Sword erect proper hilt and pommel Or Mantled Gules doubled Or, to be borne and used forever hereafter by the Spennymoor Urban District Council and by its successors constituting each for the time being the local authority for and bearing the title of Spennymoor on Seals, Shields or otherwise according to the Laws of Arms.

As a change from the usual run of mottoes with an industrial allusion which characterises the arms of towns of this kind, a punning motto in the real spirit of allusive heraldry was adopted: Spe Nemo Ruet. This bears a similarity to the name Spennymoor and means “with hope nobody shall fail”. This has a double significance apart from the pun: it refers to the spirit, which saved Durham at Butcher’s Race, and also the faith, which animated the pioneers of Spennymoor industries.

On the Arms the quarters of red and black symbolise the furnaces and coal workings. In the first and fourth quarters is a white lion, which appears also on a red ground and set about a cross in the arms of the Attwood family. The gold fleur-de-lys appears on black in the arms of the Coulsons. Thus the two principal families responsible for the rise of Spennymoor are represented in the shield. The gold cross is taken from the arms used by Durham County Council and, with the drops of blood, recalls the combat at Butcher’s Race which played a great part in the Battle of Neville’s Cross. Thus the shield indicates Spennymoor’s ancient and modern associations and its situation in Durham.

Above the shield is the closed helm proper to civic arms, from which is draped the decorative cloak or mantling of the basic colours or the arms – red and gold. The helm carries the crest. The walled or “mural” crown is the symbol of local government and it is coloured black to denote the association with the coal industry. The salamander is taken from the arms of the Shafto’s but is entirely black instead of half green and half black as in the Shafto arms, and he holds a sword (an emblem of steel manufacture) instead of a crosslet as in the arms of the Shafto family.

The Council’s Coat of Arms can be seen at the top left of each page of our website.