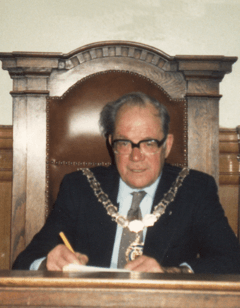 Councillor John Kitson devoted 39 years of his life to making all aspects of life better for the community he served.

That is why Spennymoor Town Council dedicated the John Kitson Archway to him, as a lasting memorial.

John Kitson dedicated his life to Spennymoor and the surrounding community. He worked tirelessly to improve the lives of the people he represented for 39 years, whether it was providing good quality housing, encouraging industry into the area, recreation facilities or conserving our local heritage.

To facilitate this, he was chair or vice-chair of many committees.  He was also a member of most other committees leaving very little time for a private life away from his council commitments. Committees included housing, finance, planning, recreation and amenities, district development council, northern regional sports committee, heritage line, etc.

He became a local councillor in 1961 but during his 39 years in office he extended his commitment to regional issues in the district councils and nationally, especially where they affected his area.

Examples of his works include:

Refurbishment of miner’s cottages and building of affordable homes both for private ownership and rental.

In the early days he was very concerned about the closure of the mines and the consequent prospect of unemployment in the area.  He worked ‘in conjunction with other bodies’  to ‘successfully set about the task of encouraging industry to the area’ (Inform, Spennymoor Urban District Council own news bulletin).  He was at the forefront of negotiations which brought firms like Perkins, Courtaulds, Thorn Lighting, Rothmans, Black and Decker,  Electrolux  to the area and, although now closed, they were extremely important at the time.

He was also involved in the developing stages of the ‘Groundwork 2000′ projects’ *(see below) He was presented to Princess Anne during one of these projects.

He was chair of the recreation committee and supported the establishment of the community centre in Middlestone Moor and the recreation centre in Spennymoor.  He strongly believed in working people having open spaces in which to relax and was a keen supporter of the parks and allotments. His support for the latter was so great that he was made an honorary life member of the allotment association and was awarded the golden spade badge. He was an executive member of the Northern Regional Sports Committee.

He was keen to maintain local heritage.  Collieries tended to have their own brass band.  When they closed there was a decline in the number of these bands. John Kitson was determined that they would not disappear from our culture and worked to help preserve them from 1974 – 1995. In recognition of this, The Northern Brass band association held a special meeting and awarded him an engraved decanter and certificate. On 15 September 2018, Spennymoor Brass Band came 12th in the National Brass Band finals of Great Britain.

With the closure of many railway lines and stations, he recognised that, again, part of our heritage could be lost. He chaired the Heritage Line committee and was involved in meetings to preserve the Weardale railway. He was presented to the Queen Mother when she opened the Timothy Hackworth museum in Shildon. (The Sans Pariel was built in the Timothy Hackworth workshops.)

He was involved in the discussions, along with David Bellamy, in the Groundwork 2000 project to ensure that the quarrying firm in part of the region restored the local landscape after quarrying finished as it was an area of unique vegetation.  Other such projects were undertaken. *(The first Groundwork N.E. Trust was set up in 1985 to meet the needs of communities suffering as a result of the pit closures. The aim was to improve the quality of people’s lives, their prospects and potential and the places where they live.  John Kitson believed that people needed to feel valued and involved in their community. This project could help people develop new skills and prospects and live in a greener way. It has now been running for over 30 years and has amalgamated to form Groundwork N.E. and Cumbria.)

John Kitson was also a supporter of charities such as the British Legion.  However, he felt it was important to do something for all the elderly people of the community.  This included raising funds for, and helping organise, the Aged Miners’ Outing for Middlestone Moor, a free day trip for any elderly person who wished to go, not just ex-miners.  This enabled many elderly people to have at least one day out at the coast during the year.  Additional coaches were put on so that other people could join their family members.  This was a very time consuming task as a large part of it involved going from door to door for donations.

John Kitson believed strongly in the rights of working people and the need for a good quality of life for them, whatever their background or income.

John Kitson was tenacious in pursuing a cause when he felt a disservice had taken place, whether it be a large issue affecting many people or an individual case. In fact, one of his family’s acquaintances said that he and the people he knew referred to him as ‘the working class hero’.

In recognition of his ’eminent service’, he was made an Alderman and Honorary Freeman of the town, one of the highest accolades that can be bestowed by the Town Council.

Further, in recognition of his unique service, the Town Council dedicated the arch under the Town Hall to him and named it the John Kitson Archway.  To signify this wrought iron gates with his name on them were erected at either end of the archway.

He was even invited to No 10 Downing Street to meet the then Prime Minister and his deputy.  Mr Blair made a point of thanking him for his constant and continued work in an area of the north east which was initially part of his constituency and for his support when campaigning to become Prime Minister.

When John Kitson died, Tony Blair, still Prime Minister, took time out from his busy schedule to send a handwritten letter of condolence.

This gives only a snapshot of the kind of work which John Kitson undertook. In fact all of his life has been dedicated to helping others, especially the town of Spennymoor and its community.